Robert found a very interesting artifact one day several weeks ago. We contemplated what it could be, it fits in the palm of your hand.

Could the markings be a brand for a local ranch?

Several days later, he found a second, with a different marking.

Similar, but not exactly the same.

A day after that, I found 2, so they aren’t a rare commodity. We should have used archaeological methodology and marked the sites of discovery. They seemed to be fairly close to our campsite, all in the same general area. Then I found a very important clue! From the markings on it Robert could research on the internet.

The bullet is a Remington .50 caliber manufactured in 1942! Then I found another, and another, eventually 7! More research indicated the 1st metal objects are the links holding the bullets together for an ammunition belt for a machine gun used in WWII.

The flared edge of the top link held the bullet snug. 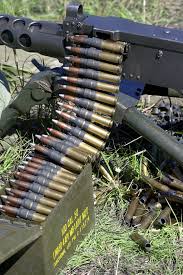 Further research told us that this area was part of the training grounds for General Patton’s Army, preparing them for battle in North Africa. These artifacts have lain in the sand and gravel for 70 years! There may even be unexploded ordnance in the interior of Kofa National Wildlife Refuge. You can see a map of the training area via wikipedia at http://en.wikipedia.org/wiki/Desert_Training_Center.

Posted on Sunday, December 30th, 2012 at 7:26 am Responses are currently closed, but you can trackback from your own site.